According to Greek mythology Odysseus, during his 10 year journey home from the 10 year Trojan War, arrived in the Kingdom of the Kikonians, the land of the Thracian people who lived between present-day Lake Vistonida and the estuary of the Evros River, where he tied up his ship.

The hero took 12 men and set out to find supplies. Along the way they found a large cave, which turns out to be the home of the fierce Cyclops Polyphemus, the one-eyed (Cyclops) son of Poseidon and Thoosa, who traps them in the cave and devours two of the men for his meal. The next day when Polyphemus returns to the cave with his flock of sheep, Odysseus inebriates him with a strong wine given to him by King Maron. When Polyphemus passes out, Odysseus and his men drive a stake into the Cyclops' eye, blinding him, and escape the cave by tying themselves to the undersides of the sheep.

Polyphemus' cave, also known as Maronia cave, is situated 25 kilometers east of Komotini, near the historical settlement of Maronia, in a limestone hill with steep, and at times sheer, corridors.

Although it is unknown when the cave was discovered, systematic exploration since 1969 by members of the Hellenic Speleological Society indicates that it has always been occupied, due to prehistoric finds of human presence, corresponding finds dating back to the Neolithic period and the Byzantine era that have been excavated in the cave.

The local villagers knew of the cave's existence long before it was first visited by prominent archaeologist George Bakalakis in 1938, following indications in a passage in Apollonius' "Argonautica".

The Maronia Cave is considered an important monument both with respect to its beauty and its archaeological interest. Its vast chambers are adorned with breathtaking stalactites and stalagmites of varying shapes and colors that resemble cypress trees and leafy branches, leading the first explorers to give such names to the chambers as the Stone Forest, the Red Room, the Chamber of the Bats, the Harp Chamber and the Chamber of the Idols.

In modern times, the cave's entrance was used as a shelter for animal herds.

Apart from the colorful stalactites and stalagmites, the cave is also home to and breeding ground of two rare species of bats found nowhere else in the world.

Maronia Cave is also the only place in the world where one can find the unique populations of the isopod Alpioniscus thracicus, the coleoptera Maroniella beroni and the non-marine mollusk Balcanodiscus cerberus. Also, 30 different species of invertebrae have been found, of which 25 have permanent populations and five are new to science, while of particular importance are 8 exclusive cave-dwelling species (6 species of troglobites and 2 species of stygobites) and at least 10 species native to the cave.

According to scientists, the cave was formed 8-10 million years ago, when the region emerged from the sea and erosion from rainwater began. the movement of the subterranean waters created caverns that were colonized by non-marine organisms.

The cave was explored by the Petrocheilos couple in the early 1960s, when the first systematic documentation of its interior commenced. A more coordinated effort began in 2000, when the Eastern Macedonia-Thrace Periphery, in collaboration with the Municipality of Maronia, assigned the task of conducting biological, geological and related research and studies to a team of professors from Thessaloniki's Aristotle University (AUTH). The researchers' results were submitted to the Periphery, which then began drafting a program to commence visits to the cave, in cooperation with experts from the Vienna Museum of Natural History and the Alistratis Cave in Serres and the Mara Cave in Drama.

The local Rodopi prefectural council recently approved a contract to assign a study for exploitation of the cave, while the plan is, in collaboration with the Speleology and Palaeontology Ephorate, to set out a 300-meter long trail along which visitors can view the exquisite stalactites and stalagmites.

Further, using state of the art laser technology, a virtual reality application will be developed that will enable visitors to "visit" and view the inaccessible sections of the cave. A similar technology will be used to videotape the rare bats, with the footage then being shown to visitors in a projection room, thus causing almost zero disturbance to the cave's dwellers.

Email ThisBlogThis!Share to TwitterShare to FacebookShare to Pinterest
Labels: Article 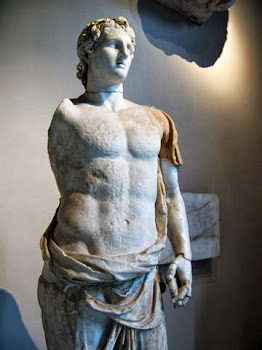 According to the Holy Qur'an, Alexander was a Messenger of God whose mission was to bring the Kingdom of God to Earth.

According to Agni Yoga, Alexander's divinely inspired mission was to unite Europe and Asia.

As Alexander solemnly declared in Opis:

"I wish all of you, now that the wars are coming to an end, to live happily, in peace. All mortals from now on will live like one people, united, and peacefully working towards a common prosperity. You should regard the whole world as your own country with common laws, a country where the best and the brightest rule, regardless of race.

I do not separate people, as do the narrow-minded, into Greeks and barbarians. I am not interested in the origin or race of citizens. I only distinguish them on the basis of their virtue. For me each good foreigner is a Greek and each bad Greek is worse than a barbarian. If ever differences arose, never resort to arms, but resolve them peacefully. If need be, I will serve as your arbitrator. Do not consider God as a dictatorial Ruler, but as Father of all, so that your conduct would resemble the cohabitation of siblings within one family. On my part, I consider all of you equal, white or dark, and I would like you not to be only plain subjects of my Commonwealth, but all shareholders, all partners. To the extent it is in my power, I shall try to accomplish all that I promise. Keep the oath we are taking with the libation tonight like a Contract of Love"

The site has not closely been moderated and the key rule of the game is that everyone should follow the principles of Beauty (no foul language, no boring intellectualizing, no personal attacks), Love (humility, compassion, mutual respect, kindness, friendliness, brotherly attitude), and Knowledge (sharing personal experience and knowledge, free thinking, open-mindedness).